It sets out the FCA’s feedback following responses received to the consultation paper issued in December 2015 and the final changes to the complaints handling rules as a result.

The new rules include changes to how FCA regulated firms charge consumers for calls made to seek post-contractual assistance or to make a complaint to the firm.This means that they must limit the cost of calls consumers make to them for all post-contractual and complaints calls to a maximum ‘basic rate’ charge.

The FCA stated that “Consumers and firms should benefit from better complaint handling, as a result of new rules published (in July 2015) by the Financial Conduct Authority (FCA). In addition, financial services firms will be unable to charge their customers premium rates when they make telephone calls to ask for assistance or to complain.”

Timeline for implementation of the changes

The FCA set out a timeline of implementation dates for the changes. Most of the changes need to be implemented by the end of June 2016, but the changes to call charges are required much sooner.

FCA regulated firms, including insurance providers and brokers, had until 26 October 2015 to ensure they comply with the changes limiting the cost of both complaint and post-contractual calls.

Given the technical changes that may be required, Callstream recommended prompt action to review the charging structure currently in place for numbers advertised for post-contractual and complaints calls by insurance providers and brokers.

What options does your business have? 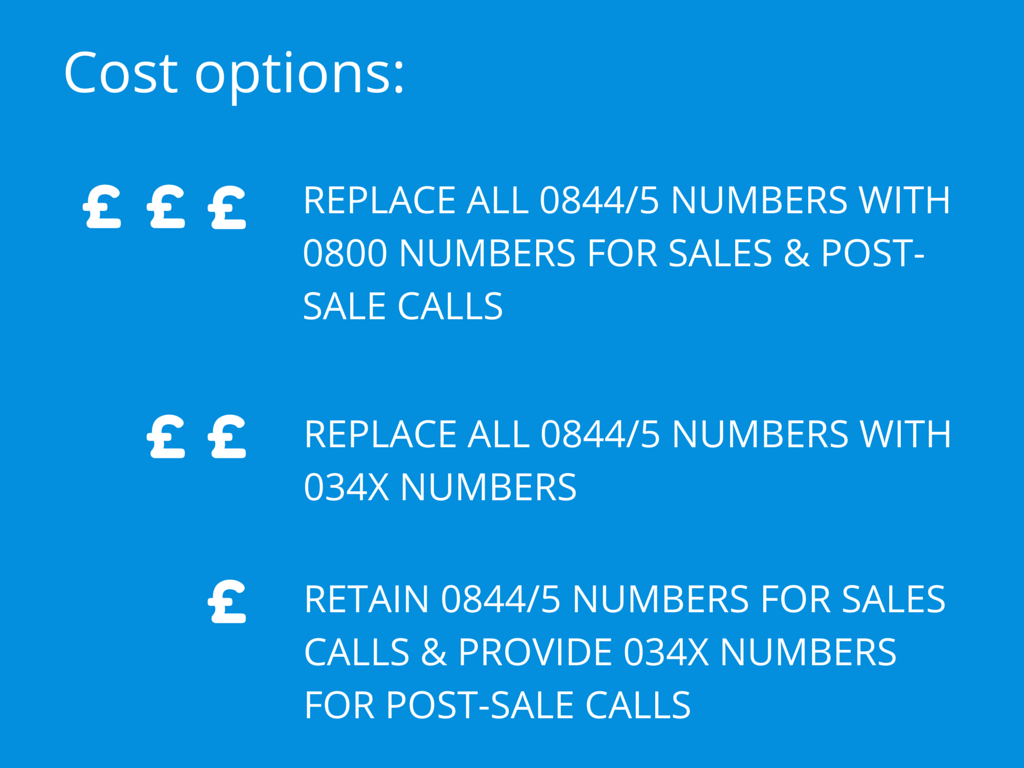 In our experience, 0800 numbers do increase call volumes as customers appreciate the ability to contact their broker / insurer without charge. However, the cost implications from the lost revenue of the 0844 calls and new cost of the 0800 calls needs to be evaluated. 0800 numbers are now free to call from landlines and mobiles.

For insurers and brokers where the cost of a complete shift from 0844/5 to 0800 isn’t affordable and they want to only advertise a single non-geographic number, they have the option of switching to an 034x number.

034x numbers are non-geographic standard rate numbers that charge consumers in the same way as 01 and 02 numbers and importantly, they also qualify as part of mobile phone users’ free minutes.

Publish different numbers for sales calls and post sale calls.  Keep original 0844/5 number for sales calls and have a new 034x number alongside it for post sale & customer service calls. A recorded announcement can be played at the start of 0844/5 calls to inform existing customers that there is an option to dial a cheaper 034x number. This is the lowest cost approach to meet the directive’s standards, without sacrificing all of the revenue from 0844/5 numbers.